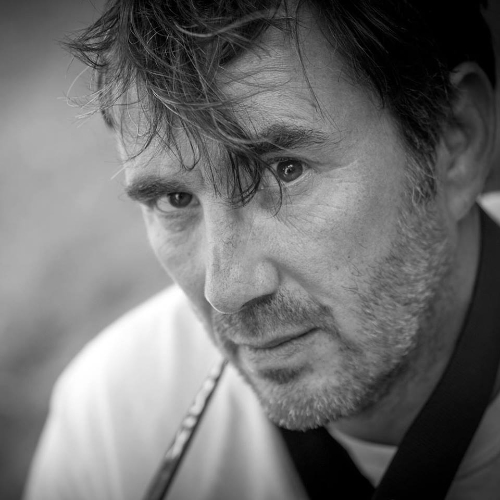 In the early beginnings of his music, finding a name was as chaotic as a leaf in the wind.

mr.t-mate was one of his first artist names, the dark times of horror and avant-garde music began, followed by Tectronik to Karl Palmenfeld. The name was based on the musical genre. His repertoire extends from film music, DnB, trance, techno to chillout, ambient, relaxation music, and much more. Apart from radio plays, he currently produces everything that is fun and relaxes him.

However, it all started with a lute (small bulbous guitar) made by his grandfather. He plucked, stroked, and played randomly by ear.

From acoustics to electronics

Karl Palmenfeld took the first steps in the direction of electronic music on the PC. Simple software (DAW) put him under its spell. Funny clicking on different buttons that generated sounds. Completely unstructured and without any special knowledge, he produced electronic music. He had no idea about MIDI, WordClock or latency, let alone studio hardware. Only over time and with the advancement of technology did his pieces of music and the studio become more complex.

Making music according to a plan did not fit into his concept. It just has to come into being. Karl Palmenfeld was more fascinated by recording sounds from machines, devices and household items with a microphone in order to process them further, as well as building bizarre instruments that emit sounds in wind, rain or sunlight. For example, a 2.42 m guitar made of stainless steel or an electric wind harp, an instrument that plays music through the wind. The generated tones are picked up with a pickup and polished by various effect devices. Then sampled so that you can play them on the keyboard.

Making music as the sole musician is a very interesting thing, but the challenge only increases with a band. The time when he co-founded Tosh and Mabrö, Hörsalat, The Pame and some other bands is a long time ago. Thanks to the musicians who accompanied him on his musical path.

Earning money and being on a stage was never a goal. Creating music is a fulfillment, a balm for the soul. It was only after almost 26 years that he was persuaded by a music label from Schleswigholstein to offer some pieces of music for sale and to publish them. Karl Palmenfeld thanks us at this point.